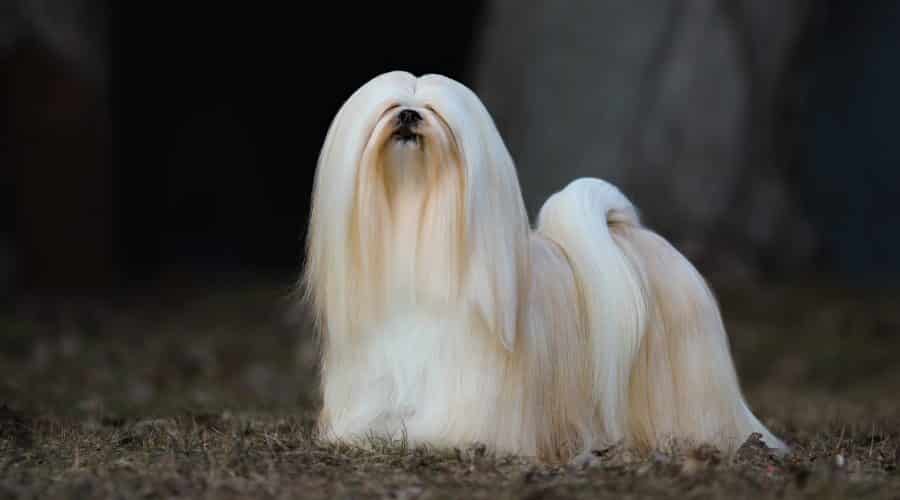 The Lhasa Apso, with its sumptuous coat, is a thousand-year-old breed that served as a watchdog for the palaces and monasteries isolated in the heights of the Himalayas. Interested in learning more? Keep reading.

Origin of the Lhasa Apso

The origin of the Lhasa Apso breed comes from Tibet, and takes its name from the holy city of Lhasa. For years, the Lhasa Apso dog was bred exclusively by the nobility and monks in monasteries and was considered an internal guardian and protector. During the Manchu dynasty, the Dalai Lama sent this breed of dog as a sacred gift to the Emperor of China. As Buddhism forbids the trade of living beings, the Lhasa Apso was always given as a gift, but only the males, so the breed was controlled by the people of Tibet.

Although no two dogs are the same, there is only one type of dog, the Lhasa Apso, but they can have different types of colors in their fur.

Dogs of the Lhasa Apso breed can have the following colors in their coat: White, brown, white, sandy (yellowish), gray, gold and honey. It is usual for cases in which two or three color combinations are present in the hair.

The Type of Hair

The type of hair of this breed of dog is long, smooth and abundant. In addition, Lhasa Apso dogs have an undercoat and an outer coat. The latter is dense and moderately rough.

Character and Behavior of the Lhasa Apso

The Lhasa Apso, because of its past as a guard dog, has a natural protective instinct, but it is usually wary of those it has just met, so in this case it is recommended that the dog approach the stranger slowly until you get used to its presence. In general, it is a very playful breed, ideal for families. As it is a sociable dog, it is not recommended that it spends much time alone.

One of the most common characteristics of this dog breed is stubbornness. Understanding this can help you use a treat as positive reinforcement in your training method. This is a dog with a strong temperament, so it’s important that it learns to socialize at an early age.

As we mentioned earlier, socializing a puppy is very important so that he meets not only people, but also different animals in order to prevent him from suffering from phobias in the future. Also, this is usually a breed that takes longer to mature than average, so these dogs will be playful for longer.

How to Feed a Lhasa Apso According to Its Age?

The diet of a Lhasa Apso dog will depend on the phase of life in which it is, always taking into account the nutritional value of each food and its predisposition to suffer from kidney problems and allergies.

Lhasa Apso puppies can be weaned at the age of two months. Once this period has elapsed, a puppy food can be introduced gradually.

Since this is a breed that does not have much physical activity, it does not need a specific diet. However, it is important to make sure that our Lhasa Apso does not suffer from any type of allergy, as it is a breed that is generally prone to them. If he does, he should be given hypoallergenic food.

As it is usual with dogs that reach the senior stage, they are at risk of obesity due to the lack of mobility and physical activity, so it is necessary to consume a food designed for senior dogs.

As mentioned above, Lhasa Apso dogs are generally free of hereditary diseases and are in good health. However, they can be prone to certain diseases. Let’s see what these are.

The most common diseases that the Lhasa Apso breed can suffer from are: keratoconjunctivitis sicca (i.e. low tear production), kidney diseases like kidney stones and other types like atopy and brachiocephalic syndrome. You should also monitor your dog in case he develops allergies.

How to Prevent the Above Conditions

Prevention of these conditions will depend on several factors. For example, the pathologies that have a hereditary origin must be researched and known through the medical history of the parents. However, the best prevention is to visit the veterinarian from time to time, to make checks and to keep the vaccination schedule up to date.

Care of the Lhasa Apso

The care of the Lhasa Apso is generally not very demanding, but there are some that need attention.

The care that requires the most time is, without a doubt, its coat. The coat of the Lhasa Apso must be brushed regularly, three to four times a week, in order to eliminate dead hairs and to avoid the formation of knots, which is frequent in this breed.

As mentioned above, it is important to pay special attention to the skin of this breed of dog, as it can suffer from atopy, a skin disease that causes hair loss and a lot of itching.

Its eyes are delicate and it is recommended to clean them regularly with special dog wipes. On the other hand, the health of their ears is of vital importance, as they have floppy ears and are therefore more prone to ear infections, which requires more frequent cleaning and monitoring.