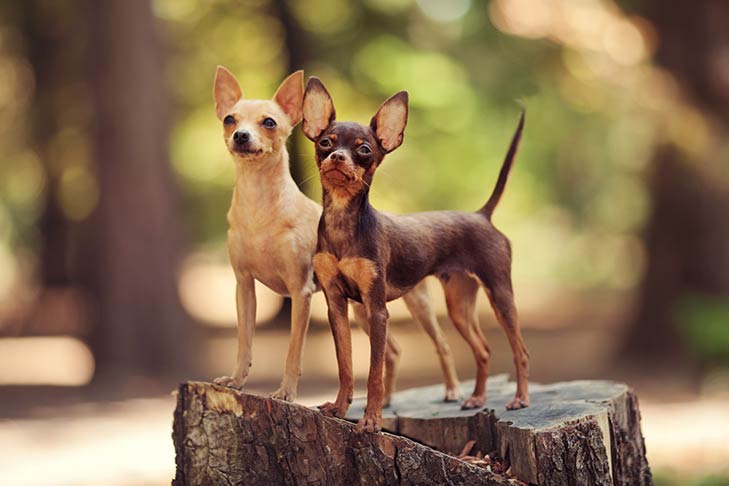 The history of the Russian Toy dog dates back to the 18th century in Russia with the introduction of English Toy Terriers as companion dogs for the ladies of the court.

Despite this, from 1920 to 1950, the breeding of purebred Toy Terriers stagnated and the number of dogs decreased to a critical level.

With the intention of recovering the breed, in the mid-1950s, the breeding of these pets was encouraged but they did not use purebred dogs and, gradually, they moved away from the appearance of the English Toy Terrier. A few years later, from a crossbreed, a male was born with spectacular ear tufts and tail.

The company appreciating it much, it was decided to maintain this model and it is thus that were born the two varieties of Small Russian: with long hair and short hair.

Curious fact, until 1990, it was a completely unknown race apart from Russia.

There are two types of Russian toy dogs, with short hair and with long hair on the ears and the tail.

Russian Toy dogs are usually rather dark in color, close to black, although copper browns are also common.

In those with long hair, it is also common to find some highlights with other darker or lighter shades.

The Russian Toy short hair is very similar to the English Toy Terrier and it is sometimes difficult to distinguish between the two,

As for the long hair Russian Toy, it has become a distinctive sign of the breed and is easily indentifiable.

Like any puppy, the Russian Toy needs to be socialized (both with humans and animals) during its first months.

In addition, it is a very playful and active dog so this energy will increase during its puppy hood.

Character and Behavior of the Russian Toy Dog

Russian Toy dogs are friendly, playful dogs like the English Terrier, their ancestors. But their playfulness does not make them disobedient, on the contrary, they are easy to train and very obedient dogs.

In front of strangers, they can show signs of shyness which disappear immediately as soon as they become more confident.

Russian Toy dogs are very active and intelligent dogs, always eager for stimulation and activity. Their education should begin in childhood, although you should keep in mind that they can be very stubborn.

For this type of dog, it is very important to interact with other animals and humans as we’ve mentioned above. Also, if you get him used to it from a young age, he won’t be wary or too shy.

How to Feed the Russian Toy Dog As Per Its Age

The feeding of the Russian toy will depend on its level of development and the stage in which it is. Moreover, as always, you will have to take into account the nutrients necessary to its health.

Russian Toy puppies are usually weaned at two months of age. After this time, you can slowly introduce puppy food.

To conserve their energy, Russian Toy dogs are usually very gluttonous and love to eat. It is advisable to feed dogs of their size, as long as you follow the amounts indicated by the veterinarian.

Although they are active dogs, Toy Russians are at risk of becoming overweight or obese as they age. They must therefore consume food adapted to their age and their needs.

Health of the Russian Toy Dog

As a general rule, the Russian Toy is a healthy, athletic dog that likes to run and jump. One of the most common health problems in dogs of this breed is dislocation of the kneecap or other diseases related to the bones and hips.

Care for the Russian Toy Dog

As a rule, this breed does not need much care. Its coat (both long and short haired) will be fine with a bath every two or three weeks and gentle brushing for the body and fine spikes for the ears in the case of the long haired ones.

Nails should also be trimmed regularly, although if the dog walks a lot, they will wear down naturally and it will not be necessary to do so.

Now that you know more on this dog breed, what are your thoughts on it? Let us know in the comments below.