One of the most popular freshwater fish, the Molly fish is a standard in the aquarium world. With a peaceful temperament and an active, social personality, this species is perfect for those new to the world of fish, as it is very easy to maintain.

Molly fishes belong to the Poeciliidae family and, out of the 40 species that compose it, 39 are of the Molly type. They are native to Central and South America and, like sharks, are ovoviviparous.

They are able to live in peaceful community aquariums and can live up to 5 years in healthy environments . Although there are many types of Molly fish, most are very similar to the common Molly. The common Molly has a triangular head and a flattened body that tapers towards the snout and tail.

Females are slightly larger than males, reaching 12 centimeters compared to 8 centimeters for males, especially when they are pregnant. In addition, they have a slightly more rounded shape and their dorsal fins are very different.

With its fully black colored body, this is the most popular Molly fish. Although most are completely black, some may have yellow or orange flecks.

With a very rounded belly, the Molly balloon fish can have the same colors and patterns as other Molly’s, but it is characterized by its round shape.

As the name implies, the red Molly fish has a very intense red hue throughout its body. Sometimes they may have spots or small dots of other colors, such as blue.

Also known as gold dust, this fish has half its body yellow and the other half black. The yellow part is the head, while the black part is the tail.

Dark orange in color, orange Molly fish can also have spots or flecks of other colors, such as black.

As mentioned earlier, Molly fish are very easy to care for and are perfect for those who are new to the fish world. Since they are found throughout most of the continental United States, these fish have been able to adapt to different types of water and habitats.

As far as diseases are concerned, they are prone to parasitic diseases, such as fungal attacks or white spot. The most common disease in these fish is Molly’s disease, caused by a bacterium called Collumnis, which causes a deformation of the fish’s spine.

To know if a fish has been attacked by this bacterium, you should check if white spots have appeared on its skin, if it shakes or if it remains lethargic. If there is a sick fish in the aquarium, it is best to isolate it and start a treatment with terramycin and potassium permanganate.

Molly fish are omnivorous and feed in the wild on algae, vegetation and small invertebrates. In aquariums, they can be fed green vegetables such as zucchini, lettuce or spinach, as well as shelled cucumbers and peas.

Their protein source is live and frozen foods such as brine shrimp, bloodworms or daphnia. In addition, their diet can be supplemented with pellets or flakes.

Ideally, they should be fed twice a day, always in small quantities, and enough to finish within two minutes, so that their digestive system can process all the food.

What are your thoughts on the Molly fish? Interested in getting one too? Let us know in the comments below. And, if you want to know more about it, come back to read the second part of our article. 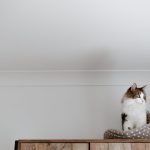 How to Choose a Cat Bed