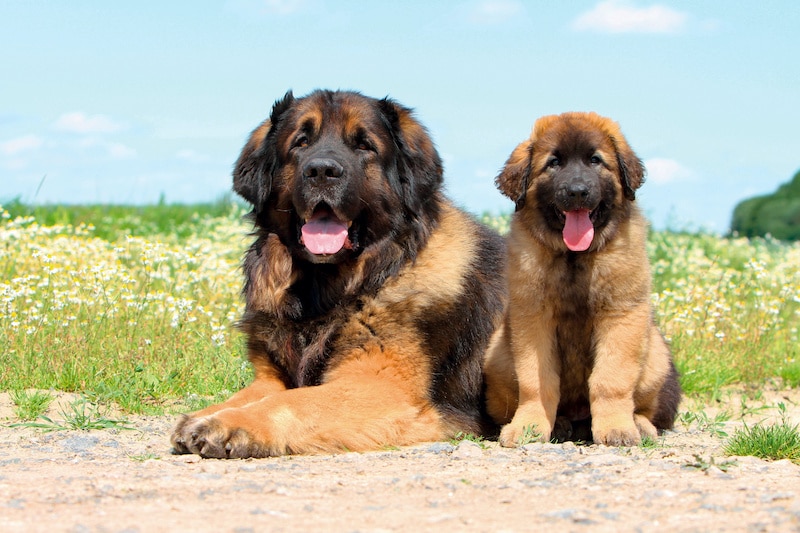 The Leonberger is a giant breed that was created in 1840 with the aim of obtaining a dog that resembled the lion coat of arms of the town of Leonberg; at least that is one of the theories about its origin. It is known that this dog is a cross between giant breeds, in particular the St. Bernard and the Newfoundland, which in turn was crossed with the Pyrenean hunting dog, which explains why the first dog was white. Interested in learning more about this breed? Keep reading below.

Examples of this breed can be golden, red, brown, fawn or cream with intermediate combinations. Although there is no such thing as a completely black Leonberger, the breed standard requires that they have a black mask and black tips to their hair.

Character and Behaviour of the Leonberger

The Leonberger’s temperament makes it a very docile dog. It is calm, obedient and loyal to its family; it is intelligent but needs training. They are very gentle, patient and affectionate and get on well with children, whom they love to protect.

The Leonberger gets along very well with other pets and children, but may need training to tolerate other species and small children. Because of its character, it is best to train this breed with gentle but firm commands.

The Leonberger puppy is a lovely and very gentle dog, playful and restless, but responds well to training commands. He is a quick learner, but needs a lot of love when he starts training at this age. Leonberger puppies are shy, so proper socialisation is necessary to help them learn to live with other pets.

How Do You Feed a Leonberger According to Its Age?

The Puppy
Leonberger puppies need to be fed properly in order to grow up healthy and develop their muscles and bones; feeding at this age should also prevent obesity and some digestive problems in this breed. Leonberger puppies should be fed several times a day, depending on their age:
– Three to four meals a day if they are between two and six months old.
– Two meals a day until one year of age.
When the puppy reaches 90% of its final weight, it is time to switch to an adult diet.

Adult
Large dogs, such as the Leonberger, have large appetites and require a specific ratio of vitamins and minerals to maintain joints and cartilage. This breed is prone to stomach problems, so it is advisable to give them several meals a day. It is possible to give him two meals a day, paying attention to the amount of food he eats and the speed at which he eats it. A feeding guide for giant breeds can be found here.

Senior dogs
The Leonberger is a giant breed and will start to age at around six years of age. To meet the nutritional needs of a senior dog, it is important to modify his diet as he ages; this does not mean simply changing his food, but following a specific nutritional plan that includes the following points
– A reduction in fat intake
– Increase protein
– Increase in vitamins

Typical Health Problems of This Breed
The Leonberger has a shorter life expectancy than other dogs, living to an average of nine years, and although it is not diseased, there are some typical health conditions of the breed. They can suffer from hip dysplasia, elbow dysplasia and hereditary vision problems. They also have stomach problems such as bloating and twisting of the stomach.

How to Prevent the Above Conditions
It is important that this breed of dog is given a proper diet that nourishes and protects the joints and cartilage, as well as daily exercise. The best way to avoid stomach problems is to give several portions of food a day.

Here you go! So what are your thoughts about this breed? Would you like to get a Leonberger? Let us know in the comments below.